Maine maple syrup has been called the official sweetener of Maine.

We make a lot of sweet breakfast dishes here at The Brewster Inn and we serve maple syrup with the vast majority of them. Several of them also include maple syrup in the ingredients as well.

March is International Maple Month celebrated in the United States and Canada. Yesterday was the 35th anniversary of Maine Maple Sunday. Maine is the nation’s third-largest maple syrup producer according to the Maine Maple Producers Association. There are 8 Maine Sugarhouses near us in Penobscot and Piscataquis counties. While Maine Sugarhouses have syrup available for purchase throughout the year, March starts the process of creating the new batches from the fresh sap collected from trees. Maine Maple Sunday gives consumers a chance to visit the Sugarhouses, learn about the process and taste some of the delicious product. 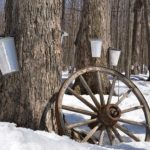 Did you know that you need 40 gallons (yes 40!) of sugar maple syrup to make one gallon of maple syrup? Or, that Maine maple syrup has four different categories described, and defined, by the amber coloring. You can find these definitions and other information on Maple Syrup Trivia thanks to Bob’s Sugar House which is located in nearby Dover-Foxcroft.

We’ve often been asked by guests if we will ever share some of our breakfast dishes in a cookbook and that is definitely one of our future goals. In the meantime, if you’re eager to try some recipes yourself – The Maine Maple Producers Association offers some free recipes using maple syrup on their website: http://mainemapleproducers.com/category/recipes/ . We hope you think of us the next time you have some delicious maple syrup. 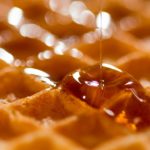 We hope you have a great start to Spring, even though it hasn’t quite felt like spring yet here at The Brewster Inn in Dexter.